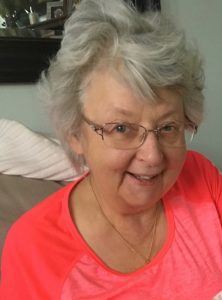 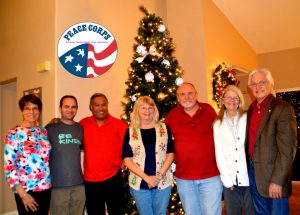 Linda Lou Bradshaw left us on July 10, 2021. She was born on January 23, 1946, in Muenster, Texas, the fourth child of Faye Brown Fette and Herman “Pip” Fette. Linda, a long-term cancer survivor, was the victim of an unexpected heart attack. Perhaps she gave too much of her heart away to her large family and array of friends, all of whom loved her and whose lives were enriched by knowing her.

Linda was the wife of Steven Bradshaw. Not high school sweethearts, they met a bit later in life while serving in the Peace Corps in central Asia from 2002 through 2004. It was a chance meeting, two people from different places and different experiences in their mid 50s just happened to join the Peace Corps at the same time and were assigned to the same country, and they happened to be perfect for one another. Their 19 years were filled with family and adventure, with the occasional chemotherapy session thrown in for.

Linda is survived by a large blended family. Her daughter, Andrea Kenyon lives in Norfolk, Virginia, with her husband Jack and daughters Kadie and Kacie. While the pandemic interfered with travel, Linda managed several visits and loved to FaceTime with her grandchildren regularly. Linda is also survived by two of her three siblings, Kay Hickey and Ken Fette. Linda’s second brother Tim Fette passed away in 2016. Additionally, Linda has many cousins, nieces, and nephews whom she loved and who loved her back. Linda’s step family is scattered from Texas to Hawaii: Steve’s eldest, Jessica Yamauchi, her husband Ryan and children Kylie and Tylyr; second stepdaughter Erica Bradshaw and her children, Evan and Emiko; Steve’s eldest son Sean Bradshaw, his wife Laura, and their daughter Charley and son Luke; stepson Nicholas Bradshaw, his wife Andrea, sons Caleb, Noah, Levi, Josiah, and daughter Suri; and youngest stepson Geoffrey Bradshaw, his wife Shanelle, sons Elijah, Ethan, Liam and daughter Hailey.

Perhaps the most important thing to know about her family was how much they all loved Linda. Her step children and step grandchildren, who didn’t know her until 2004, quickly came to feel her love and know her kindness. Some may say that using the word “love” too much cheapens it, but that is not the case with Linda. It was real, and felt in both directions.

Linda had a fulfilling, rewarding life. Raised in Muenster, she left shortly after high school to Dallas where she worked for about a year before heading off to California. She settled in the San Jose area where she made friends, got married and gave birth to Andrea. Linda had a variety of jobs, including a painting business shared with her husband Andy, but she enjoyed most being a Girl Scout leader. When Andrea was a teenager, Linda decided her hometown would be a better place for them to live, so she moved back home. There she worked at a school and a hospital and went back to school herself and obtained an accounting degree. Once Andrea was in college and Linda felt safe enough, she set out to live one of her life dreams, the Peace Corps.

After the Peace Corps, Linda and Steve settled in Las Vegas. Linda worked part-time as a tax prepare and as a volunteer for AARP, helping hundreds of people who became her dedicated clients and friends. After tax seasons, she and Steve traveled and camped throughout the United States. At last count they had visited 45 National Parks, from the Dry Tortugas in Florida to Haleakala on Maui. But most important, they visited family. When Linda developed cancer, Steve asked her where she would like most to visit while she was still able. To no surprise, she said she really only wanted to spend time with family. She will be so missed by so many.

Current plans are to hold a celebration of life for Linda somewhere in North Texas. The date is not yet set. In lieu of flowers, the family asks that donations be made to Three Square or your favorite charity. 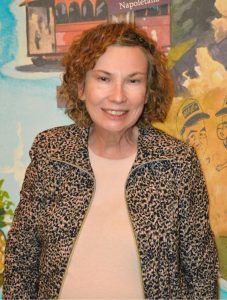 Posted in Uncategorized | Leave a comment
The American University Washington D.C. has accepted the short stories written by Peace Corps Afghanistan Volunteers from 1964-1977.
During this Pandemic 2020 I “volunteered”

to assemble their stories/photos in Book form. I’ve attached a link to the E-Book. The Book resides on my server and can be read on-line or downloaded to PC/Tablet/Phone. It’s up to 243 Pages. 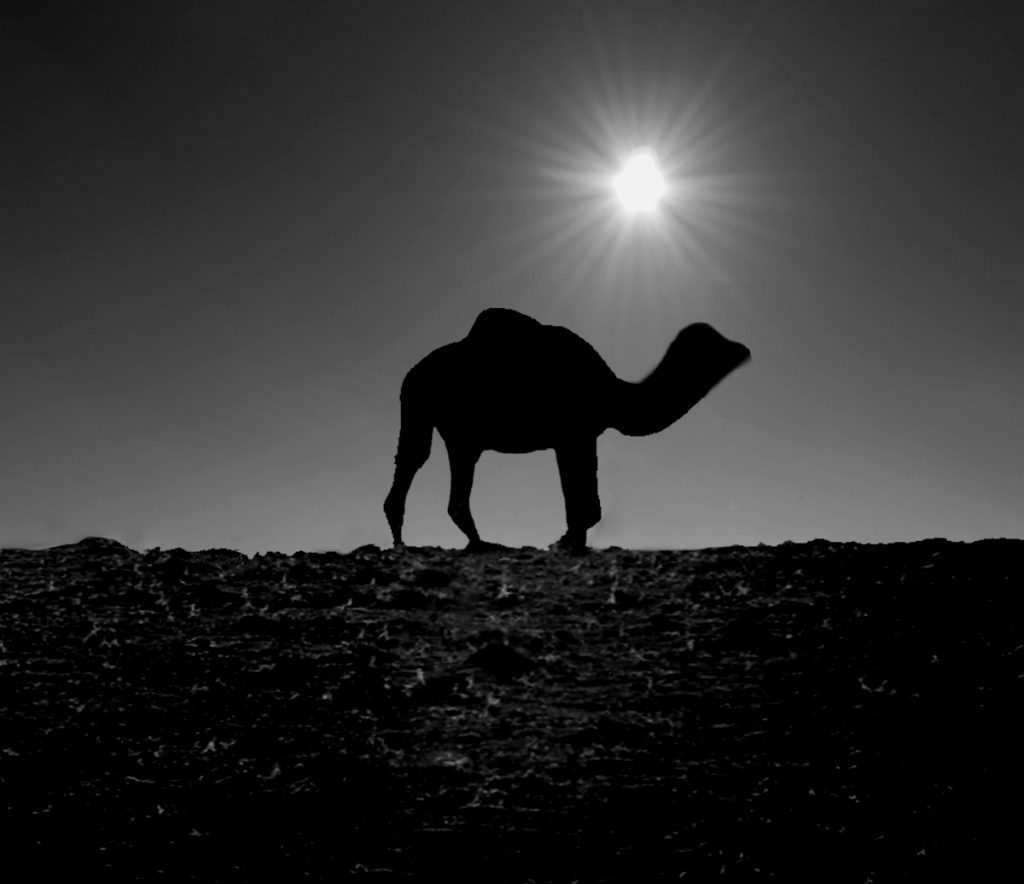 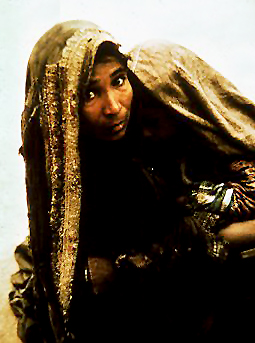 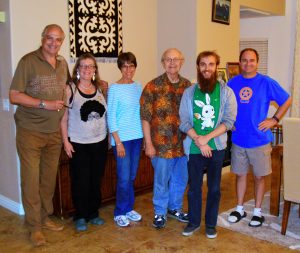 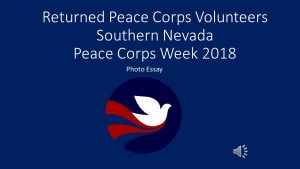 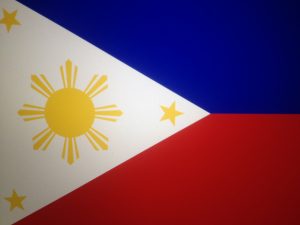 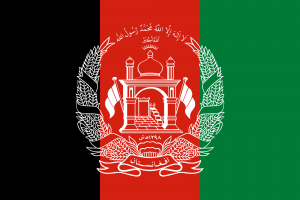 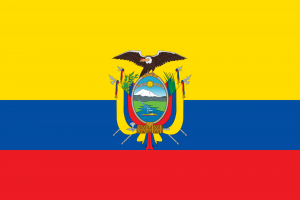 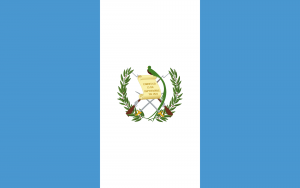 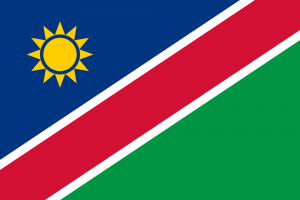 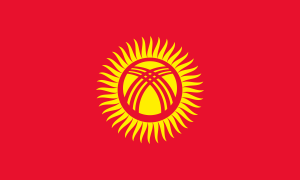 Epilogue – Reunion – The Importance of Friendship 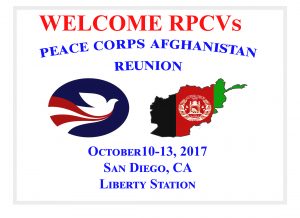 Spanning a period of 52 years and getting together with old friends is one of the greatest occurrences offered in life’s personal passage.  On October 10, 2017, sixty-four Returned Peace Corps Afghanistan Volunteers convened in San Diego, California to renew old friendships, share past stories and fill the hiatus of years with personal stories of their lives after Afghanistan.

It was Bill and Patty Mittendorff who lit the “Reunion 2017” torch at the Stone Brewery with their inspiring words to the gathered assemblage.  It was followed by a rousing Afghanistan Trivia Game hosted by Tim McCormack, a previous reunion host, which created the nostalgic ambience of humor only Peace Corps Afghanistan volunteers could appreciate.

With a 9:00am muster in Salon C at the Courtyard by Marriott Liberty Station, volunteers viewed slide presentations that offered a nostalgic remembrance of past and present images of themselves and one presentation that documented the Food for Work Volunteers’ critical role in the United States War on Hunger called Operation Help.

Tony Agnello, president of Friends of Afghanistan, followed with his introduction of Phil Smith who presented his current venture in a startup called the Bamiyan Weaving Project.  He was followed by Lou Tamaino who memorialized Bob Hull, an RPCV in his group, for Bob’s contribution to the architectural design of a girl’s school in Herat, Afghanistan.

The activities of the second evening began at 4:00pm at a Soiree at Bill and Patty Mittendorff’s home where Professor Abdul Rahim Yaseer, the Assistant Director of the Center for Afghanistan Studies at the University of Nebraska Omaha, discussed Afghanistan’s past and tenable future.  The Professor was followed by a catered affair by Kabul West Catering that served all the unique dishes volunteers remembered in Afghanistan’s tea houses.

Our final full day was punctuated with a breakout luncheon with the Food for Work/Operation Help Team Volunteers in San Diego’s Old Town at Casa Guadalajara Mexican restaurant, while other groups chose to tour the city sights.

The Last Supper was served at the Khyber Pass Restaurant, a family-owned restaurant in business for 35 years.  Like Kabul West Catering which provided the dinner on our second evening, Khyber Pass Restaurant completed the final jewel in the Epicurean Crown of Afghan Cuisine in San Diego.  A surprise birthday celebration for Dan Koch highlighted the evening’s happenings with attendees exchanging phone numbers, e-mail addresses and final hugs.

The RPCV San Diego Reunion ended with a pledge to convene again in 2019. 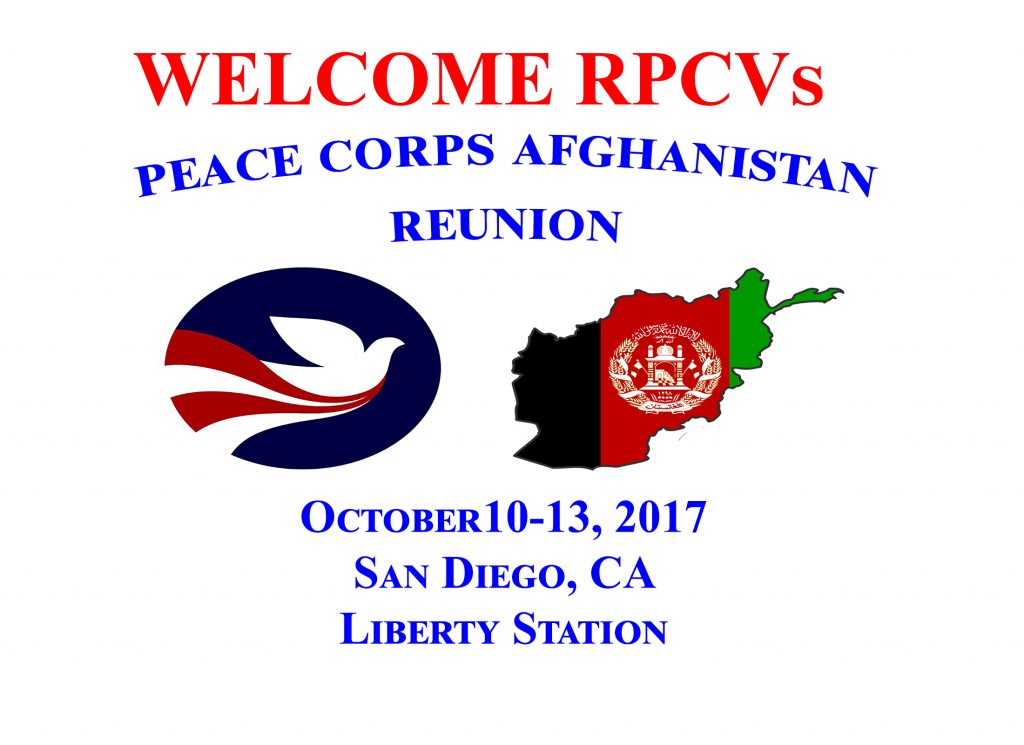 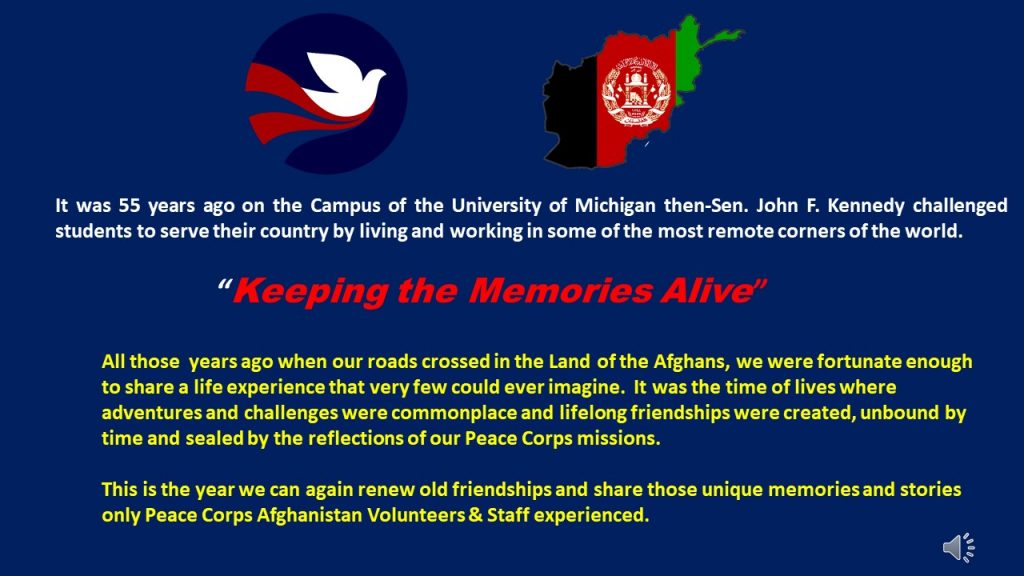 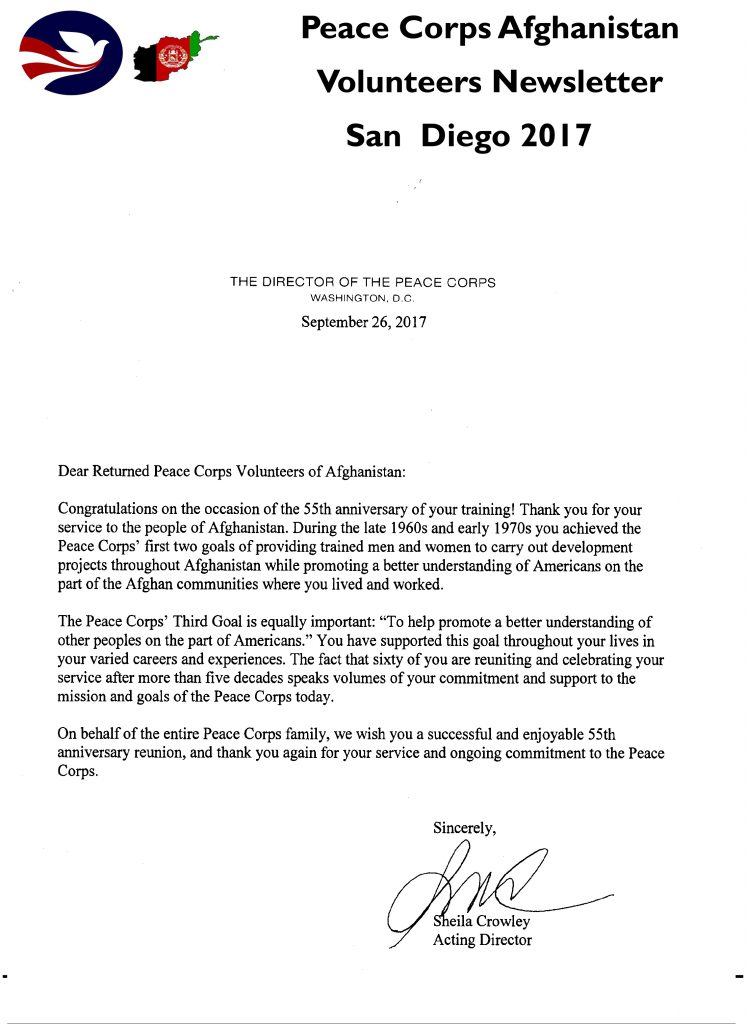 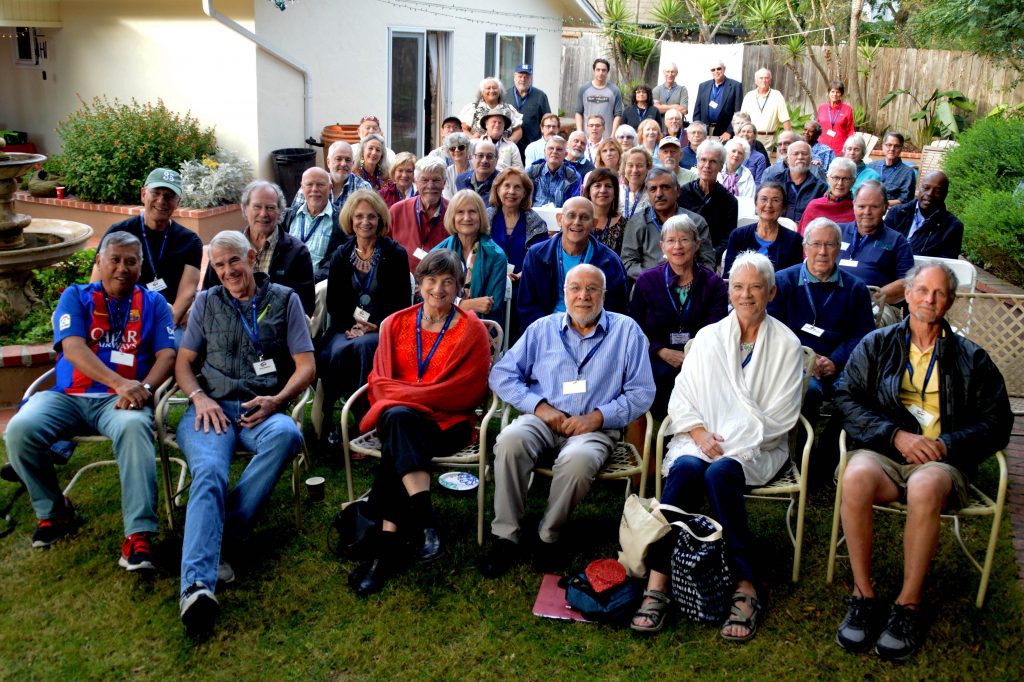 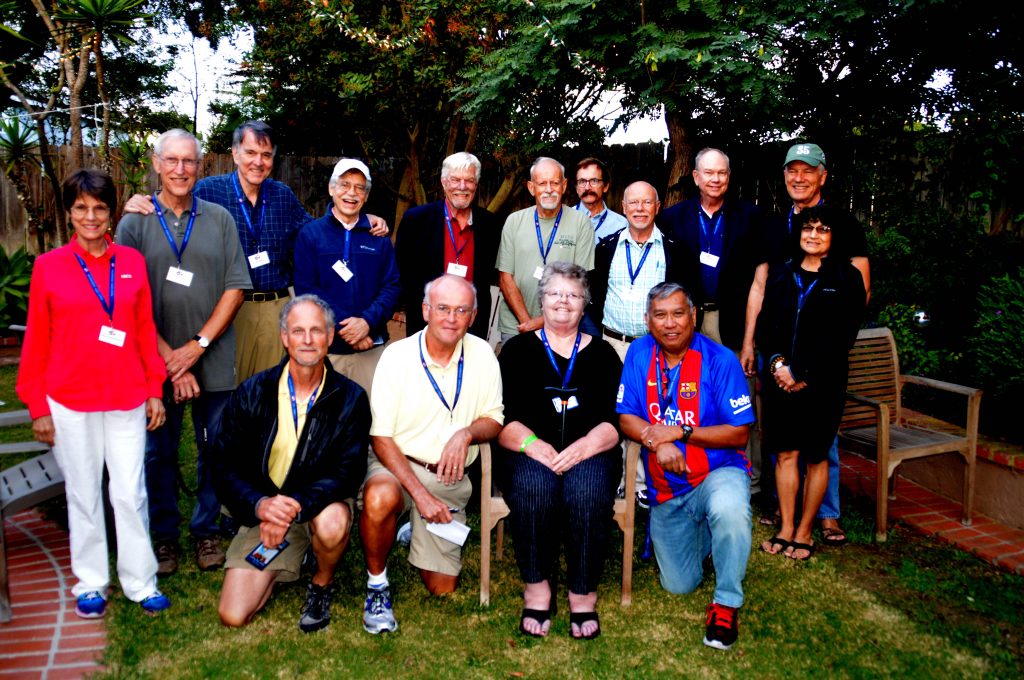 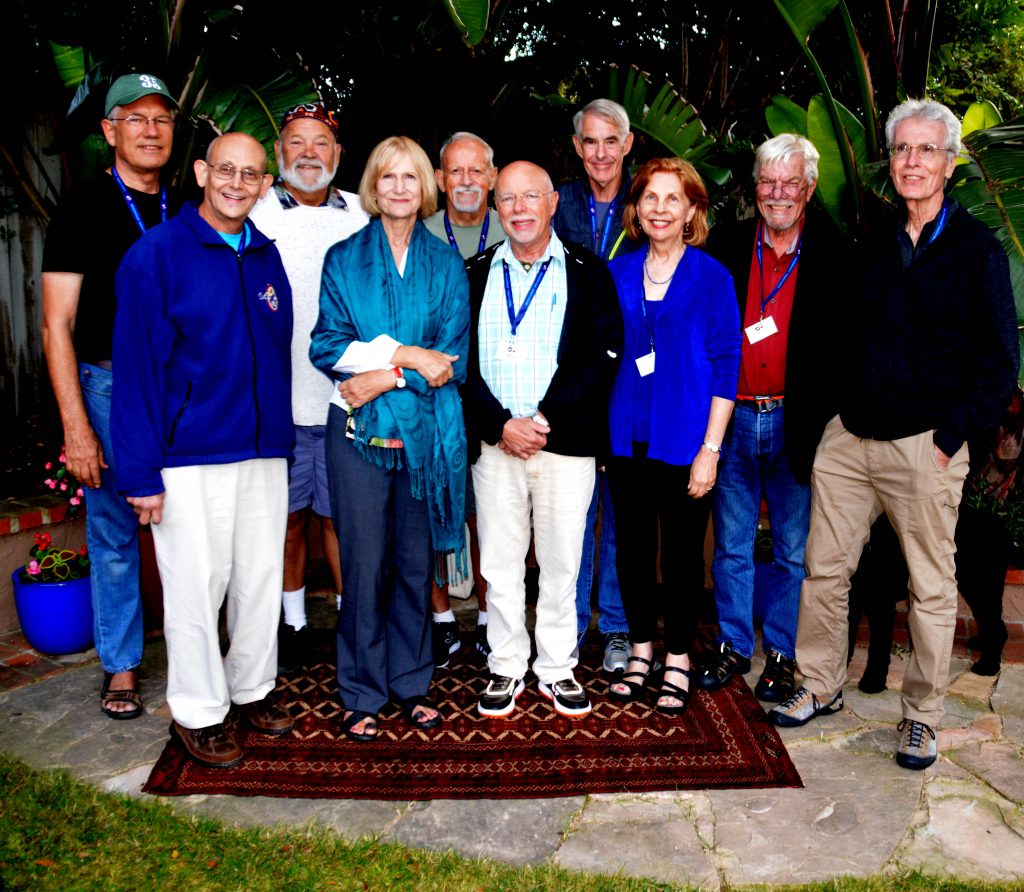 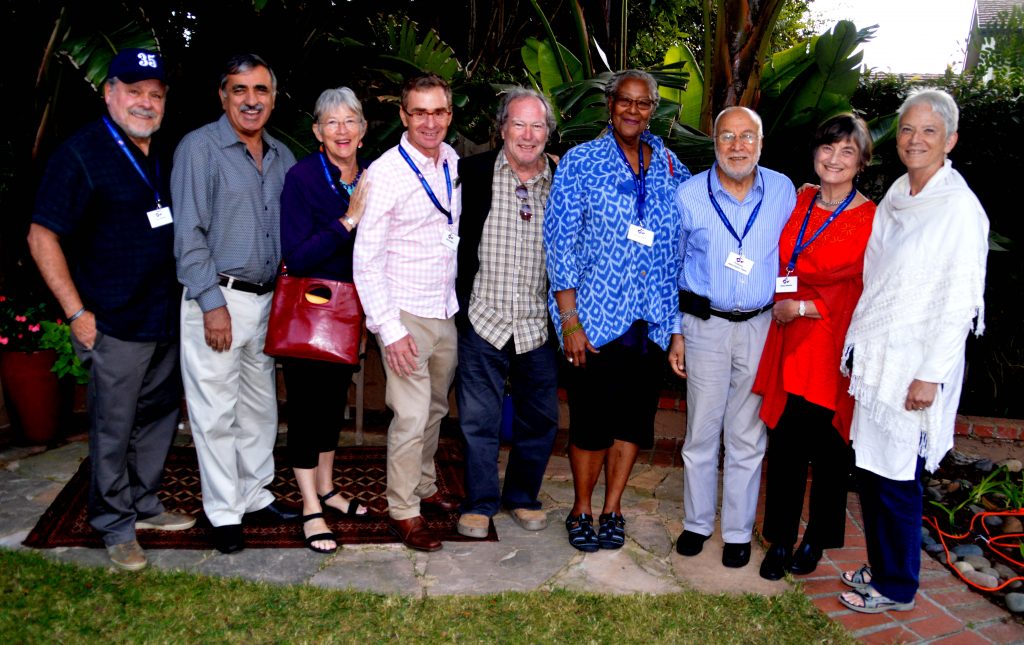 Click here War on Hunger – Afghanistan Turn on Your speakers 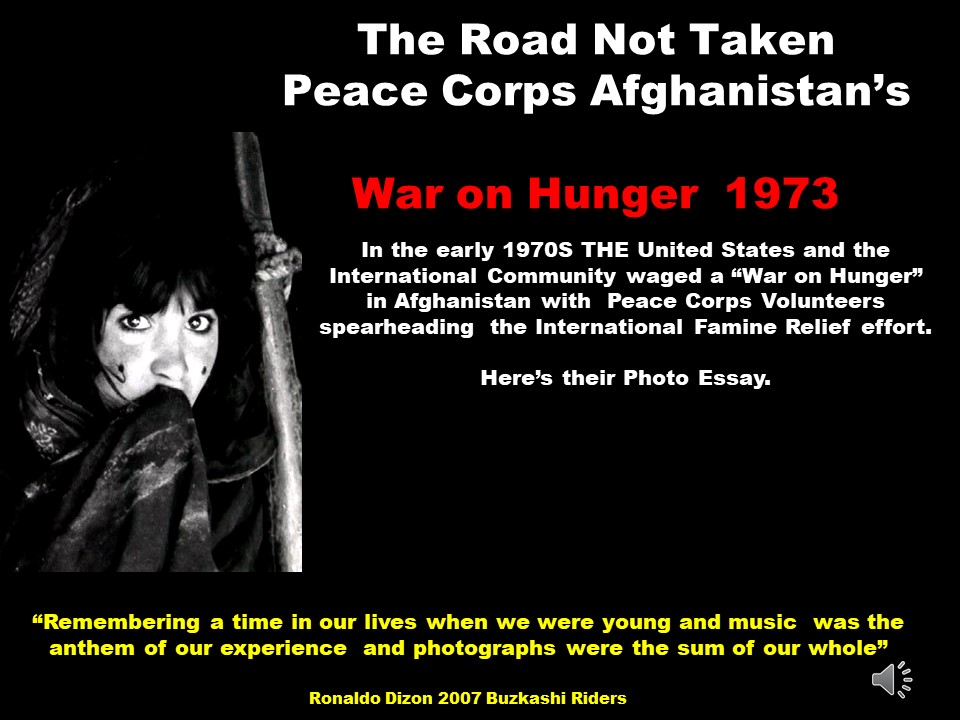